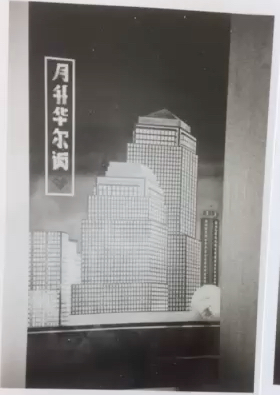 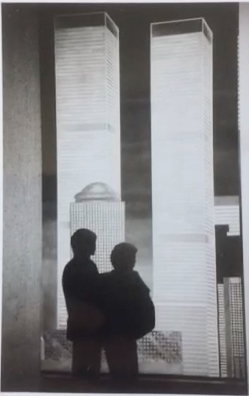 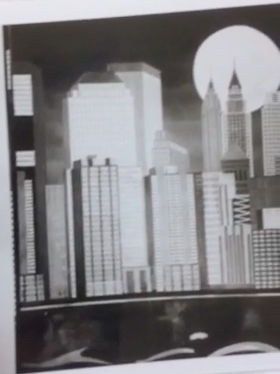 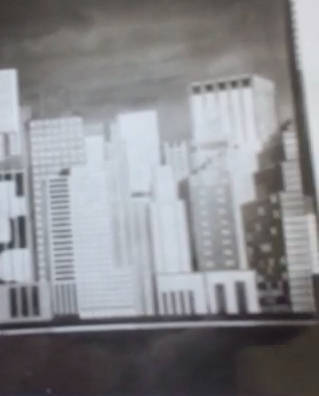 History and our built environment.

There is a Hindu or Buddhist allegory that goes like this:

A sage sat naked under a tree and meditated. A passer-by disturbed the sage:

Do you have no sense of modesty? We wear clothes in this place!

Rubbish. You're naked under this tree!

The Earth's environment is my natural clothing. What are you doing in my pants?

Until we listen to others, we may easily believe that our fixed opinions are actually how nature is, and how other people understand nature, clothes and shelter.

In 1788 the British landed a Navy fleet and convicts on the east coast of Australia. The British governor Arthur Phillip was a diplomat who worked hard to establish friendly relations with Sydney's Aborigines.

Phillip's plans were hampered by the weak public health knowledge of the 1700s. Phillip's invaders were carrying misunderstood diseases that devastated the local people he desired to befriend.

And Phillip's officer class lost control of some convicts and lower ranks who, in the vast Sydney landscape, were able to bully, murder and rape locals. Sydney's lawless element turned most local Aborigines against most of the British. 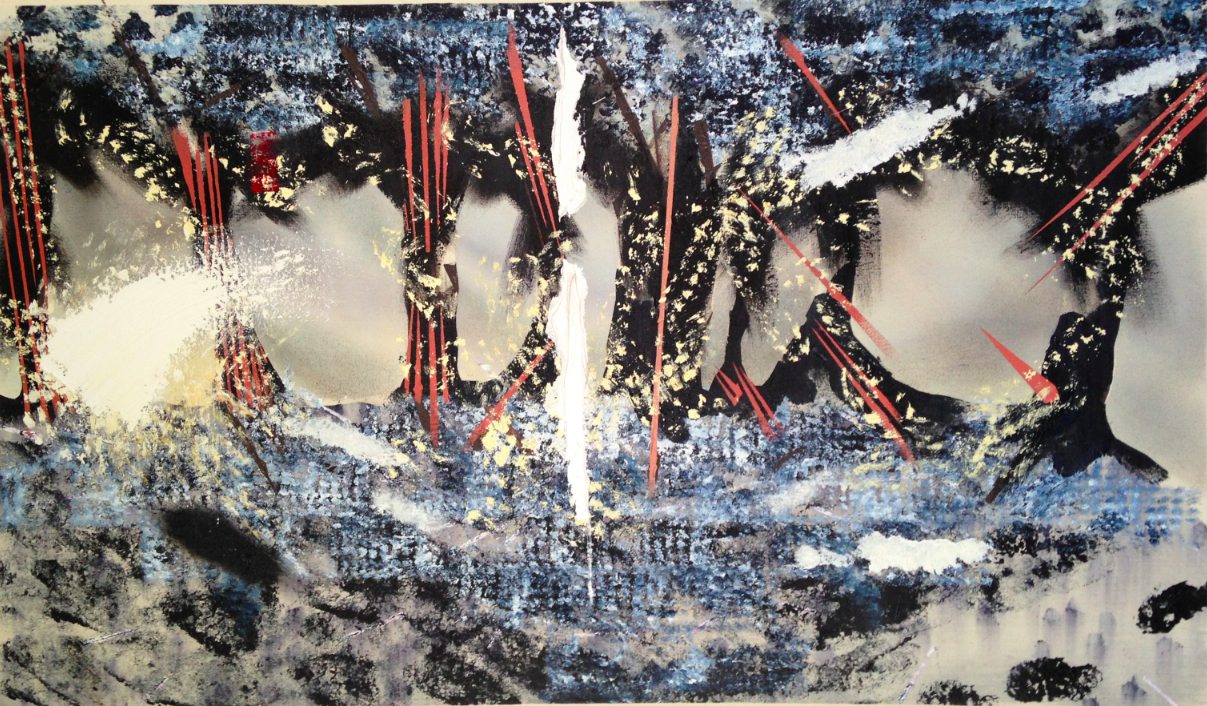 memorialises the previous souls of Nantasenhai. The painting was Aaqus's response to seeing stone tools, a starry night, a rising moon and sea mist in the forest, and torch flare on his glasses.

In 2011, Professor Bill Gammage published a wonderful book on the natural Australian landscape called The Biggest Estate on Earth. Gammage discovered that the fixed opinions of most 1776 British meant that they did not understand how local Aborigines (who had been living in Australia for c.60,000 years) understood nature, clothes and buildings.

Most colonial settlers believed the beautiful parklands and grazing lands they beheld were entirely the natural Australian landscape. This belief was false. The local Aborigines had for 60,000 years shaped and tended the continent's grazing land and forest parklands by selectively burning the natural plant ecology.

Bill Gammage's book influenced Aaqus's thinking about Nantasenhai's wild sanctuary. In the 1980s, ancient Aboriginal silica knives were unearthed buried deep in the valley near Nantasenhai. Hence Aaqus knew that Aborigines had lived, hunted and gathered near Nantasenhai. Forest Night Traditions (above) was painted in response.

After reading that the now-wild forest of Nantasenhai may have been long ago fire-shaped for grazing land by Aborigines, Aaqus went looking for clues to such a landscape history.

There are two small clearings at Nantasenhai: one at the summit (173m above sea level, left and centre of the painting); and one down the hill (bottom right) overhanging the sea. Because eucalypts have been decades-slow to regrow at all here, it is possible that Aboriginal fire-shaping long ago destroyed the tree seed in the clearings.

There is also a large triangular clearing further away, down on Roaring Beach headland, above the cliffs of Nantawan Bay. Nantawan Bay is the subject of a London collector's painting - see Collector's page.

Like many historical paintings, the beauty and drama of the re-imagined grazing landscape is tempered by insights into the sad tragedy of invasion and cruelty.

The orange ground under the curved hedge of fire-shaped Casuarina trees is the layer of 'flowers' (see photo on the Artist page). The left foreground has weeping Casuarina fronds. The red poles express a fire dynamic that shapes this landscape.

Human culture changes. For decades it has been critical to conserve wild forest and coast such as Nantasenhai. Sanctuaries help defend future generations from climate change. But it is also enlightening to investigate our past.

Estate is the only 'historical' painting done of Nantasenhai because Nantasenhai is a contemporary project. Nantasenhai paintings usually explore Aaqus's meditative response to walking in the wild forest sanctuary. As a historical painting, it was not stamped with the Nanatasenhai seal. And it was given the name of Professor Bill Gammage's historical landscape research.

The Biggest Estate on Earth has special significance in the oeuvre. Estate is a history painting even though it also has Aaqus's unique zen landscape hallmarks: batik techniques, eastern canvas space, western abstraction, 'red pole' energy lines and so on.

In 2017,Estate was submitted to the first Hadley's Landscape Prize. It was very fitting because the first year of the prize specifically required only 'history' landscapes. Estate depicts 60,000 years of Australian history in its fire-shaped pre-1788 landscape.

Hadley's arts judges rejected Estate for showing to the public. They did not include any historical landscape like Estate in Hadley's public show.

A hidden treasure, Estate is available to an astute collector interested in 60,000 years of Australian landscape history. Occult is a related landscape.


Colonial temple to arts and sciences.

People originally migrated from Africa to South and South East Asia, about 80,000 years ago. From Asia, people first migrated into northern Australia c.60,000 years ago. During recent glaciation, when sea levels dropped, Aborigines navigated their way over Bass Strait to settle Tasmania at least 35,000 years ago.

In 1803, Sydney's 1776 colony dispatched 50 settlers to Hobart. So the violent British settlement of Tasmania began. Today many Georgian-era sandstone buildings remain in Hobart, including an arts and sciences Greek temple building, Acanthe. 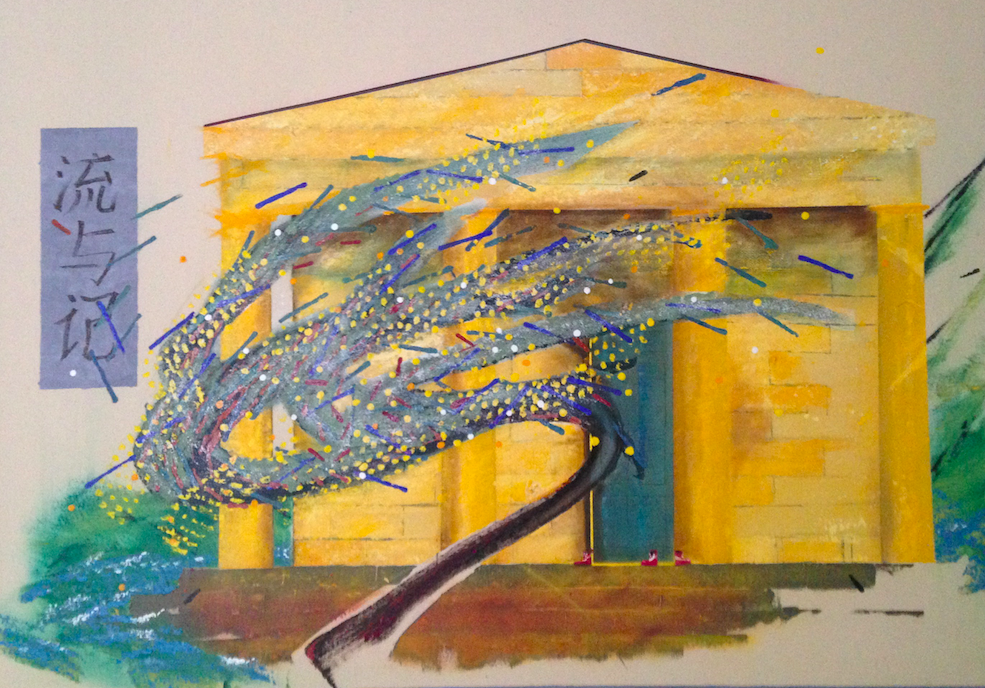 At the time, Aaqus was considering philosophical distinctions between things that were natural flows and things planned and built as part of the human agenda.

Aaqus was struck by the contrast between the Georgian temple - the result of the colonial agenda - and a solitary, parched, windblown wattle tree that struggled to grow in suburban-ravaged nature outside the temple.

This contrast - between the planned agenda of the building and the natural evolutionary flow of the wattle tree - Aaqus wrote into the painting with the Oz calligraphy: Flow and Agenda.

The unusual positioning of the building on the canvas is intentional. Aaqus both explores the building as a solid object, and also as a colonial architect's drawing with a limited colour-key palette.

Sue was a teacher and patron of theatre. So Aaqus added a theatrical element to Flow and Agenda. There are three mysterious red shoes outside the door of the temple on the threshold.

Around 1989, a Canberra investor commissioned one of the largest paintings in the world of New York City's lower Manhattan skyline.

The artist's own colour record of the whole work - a reference watercolour of the same Manahttan scene - was lent to the mural's collector, and is not currently available for display. 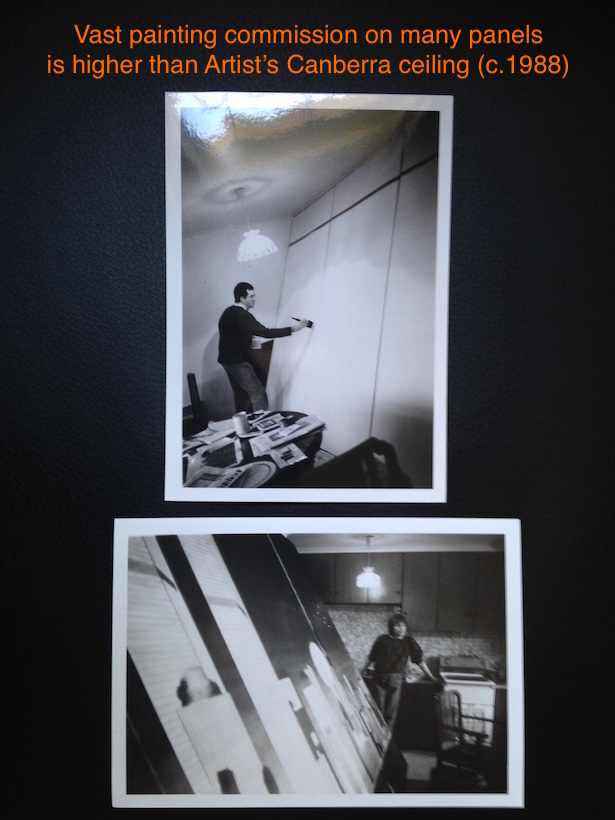 Above 1: Aaqus paints the early water layer on the Moon Rise Over Wall Street canvas. The large canvas panels were taller than the ceiling in the artist's apartment. On completion, the panels were lifted out over the balcony of the building and transported to public display in Civic.

Above 2: The second photo was taken after months of work on the still-unfinished cityscape. In the foreground are the 1980s Twin Towers.

The Artist's Muse is in the second photo.